The concert is free and open to the public

Ken Metz
Ouroboros and Other Episodes for Saxophone and Piano (2007)
1. Serpentine Returns
2. No Return
3. Stranochas
4. If Only
5. Tone Wholes

David Heuser
borne on constellations of green birds (2006)
i. wrestling with gravity
ii. no wind at all but the storm
iii. flying off into the sun

Ken Metz
Ouroboros and Other Episodes for Saxophone and Piano
The Ouroboros, which serves as an artistic point of departure for the music you will hear, is an ancient symbol representing the cyclicity of many aspects of our world. This image was also important among the alchemists as a reference to perpetual motion. The “snake” motive used to suggest the Ouroboros, also known as a twelve-tone spiral, is presented in the first movement and returns in the third movement. The “other episodes” have been adapted from movements of a recently composed piece titled Experiments for Flute and Piano, and contain descriptive titles that reflect the experimental spirit of musical composition. Each piece is an experiment that seeks to discover new facets of the unknown.

The first movement of this piece, Ploughed, is built upon a very simple melodic kernel that slowly expands out and then folds back up into itself. One can imagine the music beginning in a state of mystery and darkness. Gradually, the mood becomes more playful and dance-like. The dance becomes bawdier and more reckless, ending in violence and loss of control. The reckless moment dies away, leaving us with a sense of calm and spaciousness. Wake, the second movement, is based upon a series of contracting intervals and expanding numbers of interwoven lines. The piano and clarinet share a dialogue, but at the same time, the musical materials of each instrument are puzzle pieces that fit together to create a whole.

Composed exclusively of gamelan sounds and a nine second sample of the Bulgarian Women's Chorus, this four-channel piece seeks to explore a co-existence of gentle contemplative norms and impulsive, electric intrusions.

Nearing its completion, I discovered a kind of rigorous meditation; a sort of Ipod-based music for sleep-joggers...a state I often found myself in during the semester I worked on it. Composer Mario Davidovsky's visit to UT and his thoughts on perception in electronic music as well as the chocolate room scene from the movie Willie Wonka and the Chocolate Factory were both quite inextricably stuck in my mind.

The idea of being escorted to the edge of a mini-universe of endless combinations of sensations, to a vista from where you have but a snapshot of what you will soon experience...then set free to wander in such a place...It overwhelms me.

This scene served as a technicolor, compositional roadmap, written in some special, exotic language that only you understand.

The music for borne by constellations of green birds was adapted from some of the movements of another work of mine, Thin Green Traces, for violin and piano. Because I wanted this work to have a different identity, especially in light of the fact I was not using all of the movements from the violin work (and altering the movements I was using), I wished to find new titles for the piece and its movements. I found inspiration in the poem Tree Full of Birds by American poet Olga Cabral, whose poems I have often set (although not yet this one). The poem is below.

Then a noise like a great river
and airborne at last
the tree flew off into the sun
born by constellations of green birds
all its leaves come alive.

This piece was commissioned by the Bulgarian concert clarinetist Rossen Idealov in 2006, and it was premiered in March 2007 at the festival “New Bulgarian Music 2007” in Sofia. Composed in a compound form of the type ABCA, the piece is approximately 7 minutes long. The middle section unfolds like a mirror canon around axes “G” and “C” and the recapitulation of A brings only the recitative part of the initial material. The melodic material is derived from a short phrase exposed by the clarinet at the beginning of the piece. The overall effect of combining melodic permutations with harmonic and rhythmic transformations is subordinate to the idea of the piece – to evoke an agitated dialogue between a person and his own self – a dialogue that could reveal a gamut of feelings such as anxiety, nostalgia, fear of the unknown, joy, love, and more.

CASA members and performers after the concert 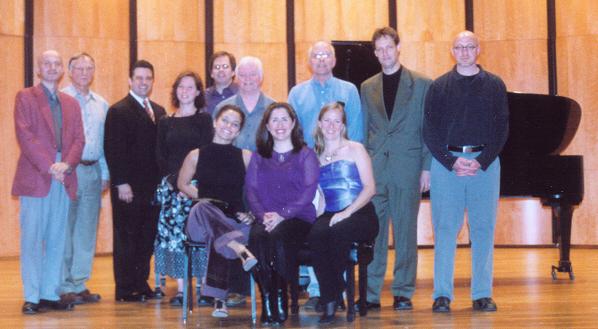